Today I’m asking the hard question, and I’d love to hear what you think. My reflection is at the end in vlog form, but I include some salient points from a Huffington Post article for those who aren’t into listening to vlogs.

The quotes are all from Jayanti Tamm, author of Cartwheels in a Sari: A Memoir of Growing Up Cult (Three Rivers Press). She is a Visiting Professor in the MFA Program at Queens College, CUNY. Reference

Nobody sets out to join a cult! And here we’re talking about harmful cults, not the benign meaning of cult as it refers to non-mainstream religious organisations.

The word ‘cult’ is loaded with negative connotations. It makes us think of brainwashing, lunatics, and mass suicide, so cults are careful to maintain a positive image in all their marketing. Their websites look good; they offer solutions to our problems, happiness and ultimately enlightenment.

“What isn’t included is the reality beneath the surface, the leader’s demands for obedience from its members, the psychological pressure, the ability to subordinate all activities to the leader’s will.”

Excessive devotion to a charismatic leader and the leader’s vision brings about a willingness to surrender control to the person who is seen as having the answer to all our problems, both personal and global. This willingness to give up control and to believe everything the leader says because he or she appears to have the answers we seek, makes members easy to manipulate.

Devotees who please the leader and work to fulfill his or her vision, ascend the ranks and gain special status and privileges. Pleasing the leader means doing whatever he or she asks of them, and so he or she comes to dictate followers’ actions and thoughts. Conformity is enforced through public shaming or rewarding by the leader and by other members judgements.

Once you’ve given up your critical thinking faculty and given obedience to your leader, you’ve opened yourself up to the kinds of abuses we associate with cults—emotional, physical and sexual.

“When hyper devotion is the expected behaviour, for acceptance new recruits tend to rapidly thrust themselves into the prescribed lifestyle. … [Devotees can] “plunge into belief, into faith so deeply, so forcefully that critical and analytical red flags, even if they once appeared, are snapped off. Belief and faith are such intoxicants that logical reason and facts become blurry and nonsensical.”

“A narcissist with insatiable needs for power, control, and, very often fame, the leader seeks affirmation of supreme authority through alignment with public figures and celebrities, achieving large numbers of recruits, and amassing private fiefdoms.”

“Those who violate the rules are punished and eventually, to maintain the coherent group unity, expelled.”

The boundary between cults and religion is not always easy to ascertain. There is a continuum between positive and negative, but one point is very clear, if there is abuse in a ‘religious’ organisation and a code of secrecy and enabling, that organisation is harmful to its members and therefore can be considered a harmful cult.

“With the right ambitious and charismatic leader, any group easily could morph into a cult. What prevents that from occurring is that most established religions and groups have accountability mechanisms that restrain that from happening.”

In less points (from the Christian Courier https://www.christiancourier.com/articles/250-how-to-identify-a-cult) :

Here’s my take on these points:

In the video I also talk about the continuim between the destructive cult on one hand and the healthy organisation on the other hand. This graphic will help you get an idea of what I’m talking about. 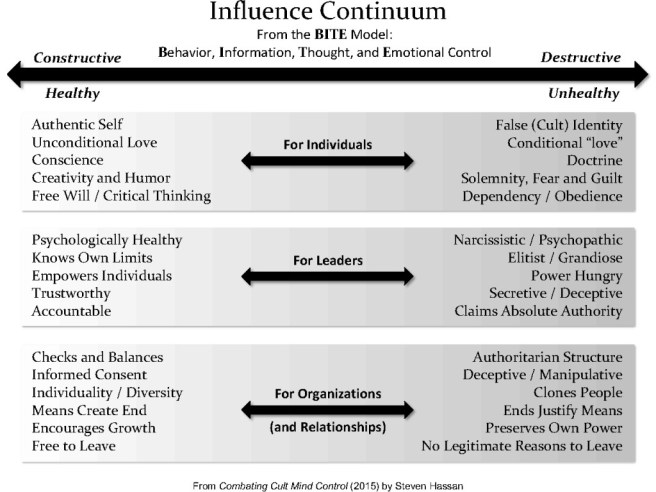 So what do you think? Where does Rigpa fit on this continuim. Is it a cult? Oh, and a warning: Given the legal proceedings in France, Rigpa is not above suing people who call them a cult, so think about your words before posting, and make it clear that anything you say is just your subjective opinion.

Private discussion on this and other related topics can be had on our Secret Facebook Group. Is is only for current and previous students of Rigpa, however, and we do moderate it closely.  If you’re interested in joining, please contact us via the contact page and ask for an invite.

Ex-Rigpa students and their Rigpa dharma friends who want to move on from the discussion of abuse in Rigpa can stay in touch through the Dharma Companions Facebook Group.

The What Now? Reference Material page has links to a wealth of articles in the topics related to abuse in Buddhist communities. For links to places to assist in healing from abuse see the sangha care resources page.

Want to keep this blog running? Support the editor;  Become a Patron!

“There is no need for temples; no need for complicated philosophy. Our own brain, our own heart is our temple; the philosophy is kindness.” HH Tenzin Gyatso, the 14th Dalai Lama.

A Note on Comments

Please be kind, keep your discussions polite, and stick to facts. Opinions are welcome; attacks on other commenters are not.